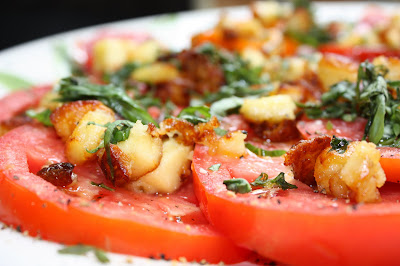 When I bought a wedge of paneer at the Durham Farmers' Market, visions of a traditional Indian meal danced in my head: cubes of cheese suspended in spinach or nestled between green peas and tomato. Instead, the paneer was used to garnish a fabulous summer tomato salad, courtesy of my boyfriend, O. After a morning of cleaning and reorganizing the house (not fun, but necessary) I was happy to turn the kitchen over to him — he's a good cook — but I wasn't prepared for just how tasty lunch would be.

I shouldn't have been so surprised, as simple dishes are often the most delicious. Quality ingredients don't require much embellishment, and Sunday's lunch was a perfect example: slices of heirloom tomatoes drizzled with extra virgin olive oil and topped with crispy pan-fried cubes of paneer, straight from the cheese-making geniuses at Chapel Hill Creamery.

Paneer can be made at home, but I've never managed to create anything near as good as Flo Hawley and Portia McKnight's version. Seared in a bit of butter and olive oil, the crunchy brown exterior adds verve to any dish, and the warm cheese takes on a rich, nutty flavor. A dish this simple doesn't require a recipe, but a list of ingredients and basic instructions follow.

Layer sliced tomatoes on a platter, drizzle with extra virgin olive oil, and set side.

Heat a large skillet over medium flame. Coat the bottom of the pan with a film of olive oil and add a small pat of butter. When the butter foams, add the cubed paneer and allow to brown on one side. Toss and brown another side, about 5 minutes total.

Scatter the cooked paneer across the platter of tomatoes. Sprinkle with kosher salt, freshly ground black pepper, and freshly cut basil. Serve while the cheese is still warm.