A birthday, a coconut cake, and neglecting the blog 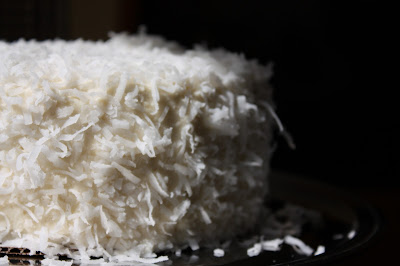 Over the past few weeks I've taken lousy photographs of a marvelous chocolate pound cake, accidentally deleted photographs of a to-die-for chocolate raspberry layer cake, and given up trying to photograph my favorite chicken under a brick recipe in a dim room. In other words, I've totally botched my blog responsibilities.

As much as I enjoy this blog, life often gets in the way. The fact is, I have a full time job in another arena, and food blogging takes more time than I realized. I recently resolved, however, to devote more energy to Cackalackyfoodie than I have in the past few months. I just hope someone is still reading.

It is with renewed vigor that I present you with coconut cake — a spectacular white coconut cake made to mark my friend Kirstin's 42nd year. The birthday girl opted to gather friends at a local bar for the big event, so I toted the cake (and forks and plates) to a pool hall, where the bartender graciously allowed me to use his knife to slice up dessert midway through the festivities. This recipe, found in pastry chef Joanne Chang's book Flour, is a full-on coconut celebration. Coconut milk makes an appearance in both the cake batter and the frosting it's swathed in, the entire creation covered with fistfuls of finely shredded coconut. Kirstin was thrilled with the cake, her husband even more so — he put down his pool cue for seconds.

I made the cake components in stages, baking the cake layers 2 days in advance, making the frosting 1 day ahead, and assembling everything the day it was served. I love the snow-puff look of a coconut cake. It's especially good for those of us who find cake decorating to be, er, a challenge.

You can find coconut milk in the Asian section of most supermarkets. Be sure to purchase coconut milk,  rather than coconut cream, used to make sweet, sticky adult beverages (and usually found in that section of the grocery store).

Preheat the oven to 350 degrees Fahrenheit, placing the rack in the center. Butter and flour two 8-inch round cake pans, or line them with parchment paper.

Sift the cake flour into a large bowl or the bowl of a heavy stand mixer fitted with the paddle attachment. Add the sugar, baking powder and Kosher salt. Combine for a few seconds, setting the mixer speed on low. Add the butter and beat for about 1 minute, until coarse and crumbly.

Combine the egg whites, coconut milk and 1 cup shredded coconut in a medium bowl. Scrape the vanilla bean seeds into this mixture.

Add half of the coconut milk mixture to the flour mixture and beat on medium-high until combined, about a minute. Stop the mixer and scrape down the sides of the bowl. Add the remaining wet ingredients at beat for 30 seconds, until the batter is light and fluffy. Divide between the 2 prepared cake pans.

Bake for 35-45 minutes (mine took 40 minutes), until the tops are firm and golden. Allow the cakes to cool completely in the pans on a wire rack.

To make the frosting: Whisk the sugar and egg whites together in a small heatproof bowl. Place the bowl over a pot of simmering water (the bowl should NOT touch the water) and whisk for 6-8 minutes, until hot to the touch. The sugar will melt, thinning the mixture.

Remove the bowl from the heat and scrape the contents into the bowl of a stand mixer. Using the whip attachment, set the speed to medium-high and whip for 6-8 minutes (mine actually took 9-10 minutes), until a light color and cool to the touch. Reduce the speed to low and add the butter a few chunks at a time. Turn the speed up to medium and mix until completely incorporated, about 4-5 minutes. The frosting will look curdled at first, but keep whipping — it will come together.

Add vanilla extract, Kosher salt, and coconut milk to the frosting and whip another 1-2 minutes; the frosting should be smooth. Use the frosting within 30 minutes or store in an airtight container at room temperature for up to 1 day, though it must be beaten until smooth before using. It can also be refrigerated for up to 2 weeks. Bring to room temperature and beat with the stand mixer using the paddle attachment until smooth before using.

Remove the cakes from their pans and level the top of each cake with a serrated knife. Place one cake layer onto a cake plate or pedestal (I put mine on a cardboard round and placed it on a revolving cake stand for easier decorating). Put 2 cups of frosting on top and spread it evenly to the edges using an offset spatula. Place the second layer top-side down on top of the first. Smooth about 1 cup of frosting on top and down the sides of the cake. Refrigerate for 20 minutes (this sets the crumb coat).