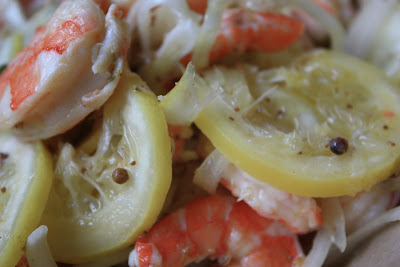 I want to claim this recipe as my own.

I want to wrap it in an old recipe box, my grandmother's Mississippi kitchen, and tales of shrimp boats along the Gulf Coast. But I can't. Those stories exist (and I hope to write about them sometime), but they have nothing to do with this fabulous pickled shrimp recipe, which I found in Frank Stitt's Southern Table.

My generous parents bring me shrimp from the North Carolina coast each year. I stash it away in the freezer for special events, and my mother's birthday luncheon is one such occasion. A precious block thawed and last night became one of my favorite snacks, pickled shrimp. Alone in the kitchen, I devour pickled shrimp directly from the container, but this Lowcountry classic makes a wonderful hors d'oeuvre.

How I adapted the master recipe: I doubled up on fennel and coriander seed (favorites), and left out mustard seed and white wine vinegar entirely.

To cook the shrimp, fill a large pot with water, one quartered onion, one roughly chopped celery stalk, a squeeze of lemon juice and a large pinch of salt. Bring it to a boil and simmer for 5-10 minutes. Shut off the heat, then add peeled, deveined shrimp. (I love the look of shrimp with the tails left on, but some people think this makes them more difficult to eat). The shrimp will turn pink and curl. When cooked through, drain and cool.

Combine all of the above ingredients in a large bowl and toss. Allow to sit overnight for the flavors to meld, covered and refrigerated.
Posted by Lynn at 5/14/2010